The typical screen resolution for most classic Amiga games was 320 pixels wide by 200 pixels high for NTSC regions or 240 pixels high for PAL regions. Original classic OCS/ECS Amiga's would typically use either 16 colors or 32 colors for the game's background graphics.

The Amiga hardware developers mostly ignored sprites and added a custom blitting chip to allow Amigas to move pixels of the background graphics at very high speeds. This eliminated the risk of sprite flicker and the moving objects could use any of the potentially 32 on screen colors, but blitted objects (called bobs) are actually part of the background and must be erased and the background redrawn every time a bob is moved or animated. This comes at a performance cost as compared to sprites which are moved and updated independently from the background. This also makes slicing the screen for added parallax more tricky as compared to most consoles which used sprites for the moving objects.

While the Amiga's sprite abilities were limited, they were far from useless. They were typically used for fast moving and small bullets, especially for SHMUPS. Only 8 16 pixel wide, 3 color sprites could be displayed per scan-line (row of pixels on screen).

2 three color sprites can be combined to create a single 16 color (15 and transparent). This method was used in many games that used the dual-playfield mode in order to have a nice 15 color player character but then very few sprites were left for anything else.

While most Amiga games used 16 or 32 color modes, ECS Amigas also introduced a 64 color mode which comes at a slight performance and memory cost so was mostly useful for static screens or slow moving games like point and click adventures.

The Amiga's "copper" chip (co-processor) could allow developers to change the RGB value of any color index on any given scan-line, and many games used this to add additional color gradations to the background.

A 'dual-playfield' mode could be used to get 2 layers of independently scrolling background graphics, but then each layer could only be 7 colors (plus a background or transparent ) and this would cost one or two of the 8 sprites available per scan-line. 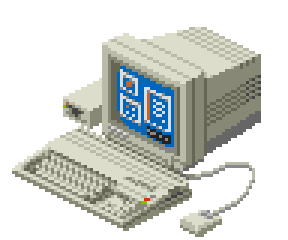 The Amiga had extremely limited sprite capabilities, as it was designed to use its custom blitting system to draw moving objects instead. The plus side to using blitted objects was there is no direct limit to how many moving objects you can have on-screen or per scan-line, but the drawback is that the blitted objects (“bobs”) could only be drawn using the exact same colors at the background was using.

If you wanted 2 full layers scrolling separately in an Amiga game and were to rely on the standard method, you’d be reduced to an 8 color background layer and a 7 color foreground layer (7 colors plus the transparent index so you can see the back layer behind it), with only a handful of sprites to try to add more color to the screen, typically used to create a player sprite using 15 additional colors. Example: YouTube Video

The most visually appealing Amiga games used tricks to use the Amiga hardware in special ways to get around these limitations.

One method tricks the sprite hardware into creating an entire background layer out of a repeating sprite pattern (typically 64 pixels wide and 16 colors ), which allows for a great looking game where the back layer has 16 colors and the front has its own separate 16 colors or even 32 (it’s own 16 plus the same 16 the sprite generated back layer uses)  Example: YouTube Video

Scroll back to top